The Difference Between CI Pipelines and DevOps Assembly Lines

What's in a name? wrote the greatest Bard that ever lived.

He was wrong. If someone ever asked me a hypothetical question about which dead person I'd want to have a conversation with, it'll definitely be Shakespeare. Let me explain why.

When we launched Shippable Pipelines last year, we wanted to highlight the difference between plain vanilla CI and the capability to put together a deployment "pipeline" that spans orchestration across multiple environments and supports all tasks involved in software delivery like CI, infrastructure provisioning, test automation, deployments, security patching, release management, config mgmt, service discovery, etc.

However, shortly after we launched, other CI providers launched their own interpretations of "pipelines"! For example,

How did everyone come to the same exact place so rapidly? As we found out, they didn't. Pipelines was being used as a fancy name for CI, with features that Shippable had supported for over two years, like Matrix builds for splitting tests or testing against multiple environments for example.

We needed a way to explain why Shippable is different. This blog explains why we landed on DevOps Assembly Lines as the perfect way to describe our approach to DevOps and CI/CD.

What are CI pipelines?

Continuous Integration has evolved tremendously over the last few years. What started as a simple process of automating build and unit tests for each code change has evolved into a pretty complex workflow.

As an example, look at the different CI workflows shown below:

However, as CI became mainstream, developers wanted to define more complex workflows with decision trees and parallelism. CI pipelines support this complexity, such as:

While CI pipelines are a huge improvement over Classic CI, they are still limited to developer-focused workflows.

What are DevOps Assembly Lines?

DevOps Assembly Lines are focused on automating and connecting activities performed by several teams, such as CI for devs, infrastructure provisioning and config mgmt for Ops, test automation for Test, security patching for SecOps, semantic versioning and approval gates for Release Managers, deployments for multiple environments, and so on.

Today, most organizations use various tools for automating specific DevOps activities. However, the DevOps toolchain is fragmented and glueing it together to achieve Continuous Delivery is a challenging task.

Most teams adopt one of the following approaches:

DevOps Assembly Lines address this problem by focusing on glueing together these various DevOps activities into streamlined, event-driven workflows with the ability to easily share state and other information across activities.

The following image shows a typical Assembly Line for a single application or service:

See the difference? The CI pipeline is just ONE activity in the Assembly Line. Each of the boxes in the picture above is a pipeline, just for different activities! Each has specific needs with respect to tools integration, runtime, configuration, notifications, etc. In addition, each pipeline is owned by a different team, yet needs to interact with other pipelines and exchange information. For example, if the Ops team changes provisioning scripts for Staging environment, the Test team need to redeploy the application and run performance tests.

A DevOps Assembly Line is therefore a "Pipeline of Pipelines".

For a deeper look at Assembly Lines, download our whitepaper: 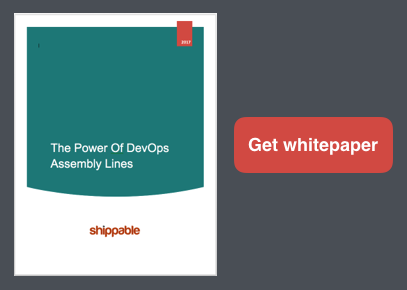